Five hikers enjoyed a morning walk on the Pot Point NatureTrail. The trailhead and parking is located just off River Canyon Road, across from the Pot Point cabin. It is an easy to moderate loop trail, mostly a packed dirt path - no rocks, rare root. The first half of the trail climbed through the forest just east of Prentice Cooper State Forest. In the hollow below, we looked for old moonshine still remains but didn’t see any. Occasionally a tumbled-down rock wall bore witness to the hard working farmers of previous generations. After a couple of miles, we crossed River Canyon Road and walked near and along the Tennessee River. The trail here was rather weedy with a few downed trees to climb over. A short road walk led to a meadow with flowers, virgin’s bower, blue mist flower, ironweed and Southern sneezeweed, to feed the butterflies.

If you would like to see some photos taken during this hike, including a map, click here.  If you are trying to view the photos through the TTA website and having trouble, please go directly to the blog at www.sdctta.blogspot.com.

Saturday's hike was a pretty good hike.  The humidity was nasty, but the temperature was temperate enough.  We departed the Big Soddy Trailhead shortly before 9am.  A little over a mile into the hike, we reached the bridge that crosses the creek heading to the Cumberland Trail.  I should say the bridge that was suppose to cross the creek--it had been washed out sometime during the spring rains.  We had to cross the creek at the old crossing point.  There was water in the creek, but large boulders were placed in the creek so we could cross.  En-route to the CT, we missed the turn onto the CT and ended up on a trail up to the top of the mountain.  We followed it until we ran into another hiker who also missed the CT turn-off.  She said the trail ended in a short distance.  We reversed our direction and picked up the CT where we were suppose to and continued on to the bridge.  We arrived at the bridge around noon and had our snack.  We began our exit around 12:30.  We didn't meet many hikers on the way in, but by the time we exited the trail, just about every swimmable spot along the creek was occupied with small groups of weekenders, trying to escape the heat.  Not many hikers and frolickers wore masks, but everyone seemed to be trying to maintain their social distancing.  Our 5.5 mile hike turned out to be an 8+ mile hike, but still was enjoyable.

FYI, I did see a study done by Duke University regarding masks.  They seemed to suggest we not use neck gators as masks against Covid-19.  Many of the gators are made of spandex material that breaks up the larger droplets we breath out and creates a fine aerosol vapor mist that hangs in the air longer.

If you would like to see some pictures taken during this hike, click here.  If you are trying to view the pictures through the TTA website and having trouble, please go directly to the BLOG at www.sdctta.blogspot.com.

This Saturday, three hikers hiked a counter clockwise loop from the Little Soddy Trailhead to the Deep Creek Bridge (where we lunched.).  From there we ascended to the Rock Climbers Parking Lot and returned to our vehicles parked at the Little Soddy Trailhead.  Our hike was a little over six miles and rated strenuous due to the climb out of the Deep Creek area toward the starting area trailhead.

If you would like to see a few pictures, click here.  If you are trying to view the photos through the TTA website and having trouble, please go directly to the BLOG at www.sdctta.blogspot.com.

There were three of us on this Raccoon Mtn. hike.  We hiked about four miles to the Raccoon Mtn. Storage Facility river overlook and return.  The hike was moderately strenuous with an altitude gain of over 1000 ft.  The weather was pleasant and the hike was let by Tammy.  If you would like to see a couple pictures taken during this hike, click here.  If you are trying to view the pictures through the TTA website and having trouble, please go directly to the BLOG at www.sdctta.blogspot.com.
Posted by Earl H. Soddy Daisy Chapter; TTA No comments:

Three of us returned to Brady Mountain Trail to complete our traverse of this part of the Cumberland
Trail. Last week we did half of the trail starting at the route 68 trailhead to the peak, and this week we
did the section from the Jewett Road trailhead to the peak. This hike was not as pleasant as last week's hike. Last week we had temperatures in the 70's and low 80's with low humidity and cool breezes.
This week was just the opposite with temperatures reaching the upper 80's with high humidity and just a slight breeze at the summit.
We departed the trailhead around 10:30 am. The first half mile was a challenge because the trail is
poorly marked or traveled. We went off-trail about thee times. We completed the 3.4 mile 900 ft
elevation gain trek in about 4 hours. We completed our return to the trailhead in about 2 ½ hours.
Again we went off-trail 3 more times.
I would say this was a very good strenuous 9+ mile hike because of the ability to hike with a few
friends during the time of Covid-19. I recommend this hike as a fall or spring hike. The access road
(Jewett Rd) is not recommended for low clearance vehicles. Not much of a photo-op hike – no water
falls or overlooks on this section of the trail.
If you would like to see the trail map, click here.
Posted by Earl H. Soddy Daisy Chapter; TTA No comments: 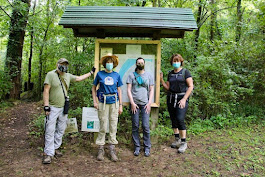