I don't have a write-up for this hike, but from the pictures, it looks like a gorgeous day and everyone looks happy.

For being the first hike of 2022, this hike, hopefully, will be our club's trailblazer hike of 2022. I had some apprehension leading up to the hike. Fall Creek Falls Park is on the Tennessee plateau,

where the day before, it had experienced a rather strong weather event. The temperature was in the 20's as I tried to contact the park to see how much snow accumulation they had. I was unable to make that contact. So I decided to take a chance and take the group up to the park where we would be able to make the hike. As we proceded up route 111, the skies were overcast and the higher we went, the more snow appeared on the terrain. When we got to the top of the Sequatchie rise, the skies cleared and the view was one of a landscape that appeared as if someone had used a Christmas Tree flocking machine and sprayed the entire area. It was spectacular. Even if we weren't able to make the hike due to conditions at the park, the drive up to the park would be worth the trip. As it turned out, the park and trail were covered with a heavy blanket of snow, but only approximately 2 inches thick.

At approximately 10 am est, we entered a winter wonderland. Everything was covered with a heavy blanket of snow. Some of the trees along the trail were bent under the load of the snow. Though it was in the 20's, it didn't seem that cold. The sporatic breeze high in the trees, would shake the snow off the tree tops and make it seem like we were in a snow globe that had just been shook. We made our way along the trail for approximately a mile and arrived at the lake. The trail along the lake provided us with a beautiful waterside panorama filled with the sun's 'yakamoz'. Thank you Richard for introducing me to the beautifully enlightening word for the day. Halfway through the loop, we stopped at a leanto and had our snacks. After our snacks, we continued for about another mile where we left the lake and the trail began a short moderate ascent. We continued our exit and along the way, the sun's warmth began to melt the snow on the trees. This presented us with the sensation of being rained on and at the same time being pelted with snowballs from above.

The trail, though not blazed, was easy to follow despite the snow. There were several spots where we had to rock hop across a small stream but we did so without anyone getting wet. We exited the trail around 1:30 pm. Our winter wonderland was pretty much in retreat by then. This 4.3 mile hike I would rate as easy, even in snow. Loved this hike and felt it was so fortunate to be able to catch it at this moment of wintertime wonder.

Eight hikers bundled up for a 4.5 mile hike at Summit Knobs Equestrian Trail.  No Horses were on the trail today, but definitely had left evidence.  A stag briefly appeared and quickly darted away.  3-4 does flagged their white tails in the distance.  The trail was easy, packed dirt and only a few muddy places, no rocks!  Rolling hills gave us a  cardio workout.  We hiked to Harrison creek branch, turned around and walked back.  Good conversation and happy hikers made the time pass quickly.  Our hike was completed before noon.  MERRY CHRISTMAS!

This was another very interesting tour by Jim Ogden, head historian at the Chickamauga Battlefield.  I had always wondered what was in this area of Moccasin Bend, but I had no idea that it held so much history.  Our group had a little difficulty getting into the parking area as the gate was locked and the key that Jim had did not work.  Someone did not follow key etiquette among the many agencies that have access to this area.  Jim therefore had to improvise and order a universal key (bolt cutters).  After this brief snafu, all nineteen of us managed to get parked and set off on a cold morning in the low 30's.  We did manage to hike all of 2.7 miles around Moccasin Bend.  Unfortunately there is not much to show in the way of pictures as it is all about the history of the area.  You can see a map of the area and an unusual view of Lookout Mountain.  This area is the oldest continuously settled spot in the U.S.  It has history going back 12,000 years and perhaps more.  Unfortunately highway construction in the 50's, which involved dredging away some of the site, and grave robbers have lost us of much of the detailed history of this area.  You can still see evidence of the grave robbing that went on. After the history lesson some of the hikers went to one of the members condo by the pool and had lunch.

If you would like to see some pictures taken during this history lesson including maps of just where we were, click here.

This was a very different hike!  We did a lot of walking, but not on a trail but around the town of Rugby, TN.  This is a Victorian town established in Appalachia.  The idea originally was to support those unemployed aristocrats and ordinary citizens in England.  To find out more about this unusual settlement from the 1880's you are just going to have to do some research as it is very interesting.  Our group of 17 loaded up for the 2.5 hr. drive to Rugby.  This was one of our longest excursions and we truly did intend to hike.  It just didn't quite work out.  Almost but not quite.  After arriving in Rugby we met our tour guide and began a very interesting tour of the town.  I guess you might say that Rugby was a case of too many chief and not enough Indians.  The idea was basically sound, but the makeup of the people was not.  Anyway, we enjoyed a video which clearly explained what was behind the founding of Rugby and the people involved.  Following the video we toured the historic building of Rugby.  By the time we were finished the the tour, it was past time to eat.  If there is one thing this chapter is good at it it eating.  There was not much to choose from in Rugby.  In fact, there is only one place, the R.M Brooks Gen. Mdse. store.  Inside, you could spend hours looking at original artifacts that have been collected over the years.  But the best part is that our waitress also ran the store and did the cooking of deserts.  We had a wonderful lunch and then it came time for the aformentioned deserts.  She had just finished making fried apple pies and coconut pie.  We made our decisions and received our deserts then she mentions she had some other deserts that the had recently made.  This simple act created a great deal of turmoil among us.  Reorder and adjustment were rapidly made. Then she reappeared an mentioned yet some additional items she had.  The crowd went crazy! We just couldn't decided!  Finally things calmed down and order was restored and we enjoyed hearing her stories and recipes.  Of course, by now it was too late to go on the planed hike so we made a short detour to the local historic cemetery for a short visit before heading back on the road home.  Many thanks to Trish and Jane for organizing this outing.  I had a great time. 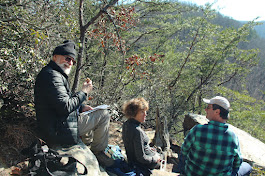 The perfect spot for a snack